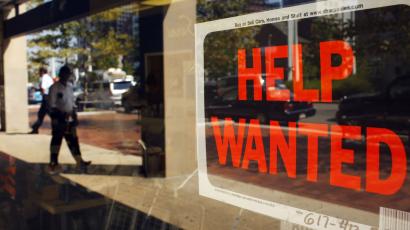 The economy added 304,000 jobs in January, the Labor Department reported on Friday, well above the 165,000 economists had anticipated.

The report comes despite a five-week shutdown that lasted most of the month, but also dramatically revised downward the stellar December jobs report, which was revised down to 222,000 from the original 312,000 estimate.

The unemployment rate ticked up to 4 percent from 3.9 percent, even as figures on labor participation remained steady.

The Labor Department had said earlier it would consider the 800,000 federal workers who were furloughed or working without pay during the shutdown fully employed. But in Friday's jobs report, it said that the shutdown had contributed to the uptick in unemployment.

Temporary layoffs increased 175,000 as a result of the shutdown, the department said Friday, a figure that included some furloughed workers. All in all, the number of unemployed workers rose to 6.5 million in the survey.

The shutdown also may have increased the number of people who take on part-time work for economic reasons, which increased by about half a million to 5.1 million in January.

But the establishment side of the data seemed to shrug off the shutdown altogether.

"There were no discernible impacts of the partial federal government shutdown on the estimates of employment, hours, and earnings from the establishment survey," the Labor Department said.

Wages rose 3 cents, well below their 10 cent rise in December. All in all, average hourly earnings were up 85 cents in the past year, a 3.2 percent increase.