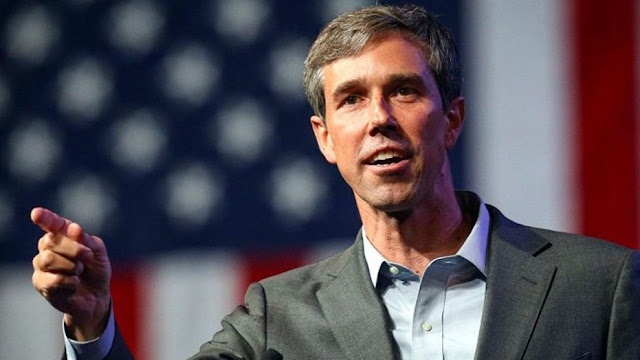 Beto O'Rourke has seen his stock fall in the last month.

O’Rourke has vexed some observers over the past few weeks, first for livestreaming a dentist appointment — a move critics panned as oversharing — and later for documenting a meandering solo road trip in a series of deeply personal blog posts.

He’s also been a bystander as other big names like Sens. Elizabeth Warren (D-Mass.) and Kamala Harris (D-Calif.) have entered the race.

The growing primary field and slow pace of preparations for a potential campaign have left some Democrats wondering if O'Rourke's indecisiveness about whether to be a candidate is hurting him.

“I’m hoping he regains his momentum but he really has in many ways lost his message with the reality TV of teeth cleaning and his undefined road trips,” Robert Zimmerman, a major Democratic donor, said. “Maybe there’s a strategy behind it but it started becoming trivial.”

“It was a bridge too far,” another major Democratic bundler agreed of the teeth cleaning and O’Rourke’s tendency to overshare on social media.

The former Texas lawmaker garnered rock-star status during a bid for the Senate last year, and won a lot of attention when news broke that he had met with former President Obama. A number of former Obama aides also praised him, providing early momentum for him to enter the presidential race.

But in the last month, he’s faded in the discussion among top fundraisers and donors, the bundler said. This source said that O’Rourke’s silence has been interpreted to mean he’s not running.

A spokesperson for O’Rourke did not respond to The Hill’s request for comment.

While other would-be candidates including Sens. Amy Klobuchar (D-Minn.) and Michael Bennet (D-Colo.) have been burning up the phone lines and participating in meet and greets with prospective donors, O’Rourke hasn’t gone through the machinations candidates typically participate in.

“He hasn’t picked up the phone and there are lots of others who have,” the bundler said, adding that, as a result, “not one of us has brought up his name recently.”

To be sure, it’s still early in the cycle and the first votes in the 2020 nominating contest won’t be cast for another year. Hillary Clinton, the 2016 Democratic nominee, didn’t announce her campaign until April 2015. John Kerry, the Democratic Party’s 2004 presidential nominee, waited until September 2003 to declare his bid.

But Warren, Harris and Sen. Cory Booker (D-N.J.), who entered the race on Friday, have been seen as 2020 candidates for years. O’Rourke only began floating the idea late last year after losing his Senate bid.

O’Rourke has also proven to be an adept fundraiser, particularly when it comes to attracting small-dollar donations.

The Texas Democrat’s 2018 Senate campaign against Sen. Ted Cruz (R-Texas) was powered by a record $80 million in contributions, including tens of millions in small-dollar donations given through ActBlue, the Democratic Party’s online fundraising platform.

But the Texan closed out 2018 with only a small fraction of that money — less than $287,000, according to his most recent federal filing, which was made public on Friday.

Multiple Democratic operatives and strategists cautioned that time is of the essence for O’Rourke, and that delaying a decision on a presidential bid could cost him valuable staff hires and commitments from donors.

“You only catch lightning in a bottle once,” said Adam Parkhomenko, a former adviser to Clinton’s 2016 presidential campaign. “He was rolling so quick on that [Senate] campaign, that if he had kept that going, he probably would have kept a handful of people from ever entering the race.”

Despite pleas from die-hard supporters and activists to mount a presidential run, O’Rourke appears no closer to making an announcement than he did a month ago. He told Politico last week that he was still “potentially” months away from making a decision.

He’s sure to draw an audience when he sits down for a televised interview with Oprah Winfrey on Feb. 5 for “Oprah’s SuperSoul Conversations from Times Square,” an event that will also include actors Bradley Cooper and Michael B. Jordan, as well as philanthropist Melinda Gates.

But as the field of Democratic presidential contenders grows, O’Rourke may find it harder to break into the contest.

Democratic candidates have already begun scooping up valuable aides and advisers in key early primary states. They’re meeting with voters, hosting town hall events and rubbing elbows with the donors that will help fuel their campaigns through what is likely to be a long and crowded primary season.

“There are operatives in the party who are chomping at the bit to get ready for 2020,” said Craig Smith, a Democratic strategist and former White House political director under President Bill Clinton. “They’re ready to go. Those people are looking for candidates, so delaying doesn’t help you with that crowd.”

“The longer you wait, every day more and more of those people will have taken themselves out of the pool — potential staff, advisers, endorsers, fundraisers.”

Meanwhile, O’Rourke has found himself on the outside of discussions about a possible presidential run.

Draft Beto, a group of Democratic activists who support a 2020 White House run by O’Rourke, has begun doing the legwork of building a presidential campaign, including raising money and putting together email lists of potential donors.

And O’Rourke’s former advisers are having discussions with potential operatives as they look to lay the foundation for a campaign operation. O’Rourke, however, has insisted that those conversations are not at his direction.

Nate Lerner, the co-founder of Draft Beto, acknowledged that the group was “naturally a bit concerned” with O’Rourke’s ability to build up the infrastructure for a campaign after he told Politico that a presidential decision could still be months away.

But Lerner said that by not rushing to a decision, O’Rourke is bolstering his credentials as a political maverick “removed from the political game.”

“Beto isn't a typical candidate,” Lerner said. “He can enter late and catch up immediately. Plus we also see it as an opportunity to play more of a role in helping him build early grass-roots and political infrastructure.”

Waiting a few more months to decide on a White House run could also have its advantages for O’Rourke, Parkhomenko said. He argued that doing so could help him better evaluate the political landscape and avoid competing with other campaigns for valuable media coverage.

Still, delaying a decision on a potential run will cost O’Rourke precious time on the campaign trail, Parkhomenko said.

“There are two things in a campaign: time and money,” Parkhomenko said. “Money might not be an issue for Beto. But he’s losing time.”