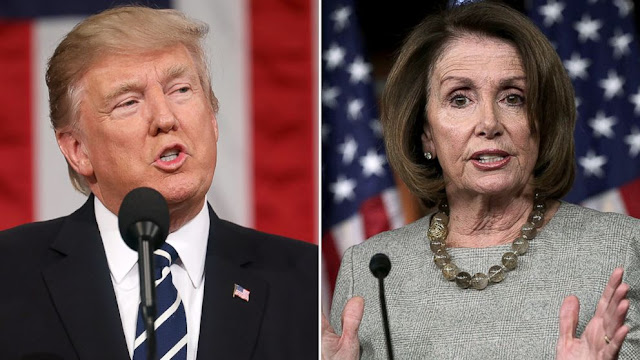 The president, congressional negotiators and other lawmakers are sending conflicting signals about whether a deal to fund border security and avoid another government shutdown is possible before a Friday deadline.

The Senate’s top Republican negotiator, Sen. Richard Shelby (Ala.), on Sunday said the talks had stalled in part because Democrats were raising new concerns over deterring immigrants at the border while President Trump accused Democratic leaders of interfering in the talks.

“I think the talks are stalled right now. I’m hoping we can get off the dime later today or in the morning because time is ticking away,” Shelby said on “Fox News Sunday.”

Shelby put the chances of a deal at “50-50” and warned “the specter of a shutdown is always out there.”

Trump questioned whether Democrats were negotiating in good faith.

“I don’t think the Dems on the Border Committee are being allowed by their leaders to make a deal. They are offering very little money for the desperately needed Border Wall & now, out of the blue, want a cap on convicted violent felons to be held in detention!” he tweeted Sunday.

An administration official said that in a leadership staff meeting Saturday Democrats said they wanted to reduce the number of beds Immigration and Customs Enforcement (ICE) has available for detained immigrants from 38,000 to 16,000.

“This is ‘abolish ICE.’ That’s what it is,” the official said, characterizing the Democratic position and warning that Republicans are about to “walk” away from the negotiating table.

A House Democratic aide confirmed that Democrats have proposed a cap on the number of ICE detention beds and said the proposal will “force the Trump administration to prioritize arresting and deporting serious criminals, not law-abiding immigrants.”

Acting White House chief of staff Mick Mulvaney warned Sunday that a shutdown is still on the table and accused Democrats of not presenting a consistent offer.

“Is a shutdown entirely off the table? The answer is no,” he said on NBC’s “Meet the Press.”

Democrats, however, insisted Sunday they are willing to cut a deal, though they stopped short of promising one.

“It’s a negotiation. Negotiations seldom go smooth all the way through. It’s give and take, it’s compromise, it’s the way government is supposed to work. We’ve got good people on this conference committee,” Sen. Jon Tester (Mont.), a leading Democratic negotiator, said on “Fox News Sunday” during a joint appearance with Shelby.

“The bottom line is that we’ve got people who aren’t bomb-throwers, they’re people who know how to work together and get a deal,” he added, referring to members of the joint Senate-House conference committee that has been in talks over the last two weeks.

“I’m not positive that we’ll end up with a deal but with this group of people, and the folks in the House, I think we end up with something that deals with detention beds, with barriers, with technology, with the challenges we have at the southern border, in a common sense way.”

Tester said he is “very hopeful” the negotiators can come to an agreement.

Sen. Chris Murphy (D-Conn.), appearing on CNN’s “State of the Union,” said Democrats aren’t in favor of giving Trump more than $2 billion for border barriers in 2019 because there are only seven months left until the new fiscal year begins in October.

“The problem now is that we’ve only got about 7 months left on the fiscal year. So I don’t think the president can actually spend much more than $2 billion,” he told CNN’s Jake Tapper.

Negotiators had hoped to complete a deal by Monday and last week even said they could wrap up before the weekend, but now it appears the impasse will drag well into next week.

Congress must approve — and Trump must sign — a spending package by Friday to avoid another partial government shutdown.

With the prospect of a deal by week’s end dimming, the White House is reviewing different options for funding the wall.

Mulvaney said the president is likely to combine whatever money Congress appropriates, or has already appropriated, with reprogrammed federal money.

“We’ll take as much money as you can give us and then we’ll go off and find the money someplace else, legally, in order to secure that southern barrier, but this is going to get built with or without Congress,” he said on “Fox News Sunday.”

He said the president can redirect a substantial amount of federal funding without declaring a national emergency but would also reserve the right to declare such an emergency if he needs additional resources.

“The whole pot is well north of $5.7 million,” he added, referring to the full amount Trump has requested from Congress to build the wall.

He noted that past presidents have declared 58 national emergencies since the National Emergencies Act was passed in 1976.

Rep. Mark Meadows (R-N.C.), the chairman of the conservative House Freedom Caucus, predicted Sunday that Trump will use his executive authority to fund the border wall if negotiators fail to meet the Friday deadline.

"I do expect the president to take some kind of executive action," he said on "Face the Nation" on CBS. "A national emergency is certainly part of that. There are a few other things in his toolbox that he could use, but I do expect him to do that if we don’t reach a compromise."

Other Republicans, however, sounded more hopeful of a deal.

“I am more optimistic today than I have been about a deal on border security," he told John Catsimatidis on New York's AM 970 “The Answer."

Cornyn, echoing what several Republican and Democratic senators have said in recent days, argued that the substantive differences aren’t that significant.

But he said the political drama surrounding the border has complicated the talks.

"Unfortunately this reflects some of the worst of Washington, because this really hasn’t been about border security. This hasn’t even really been about the money. It’s been about Ms. Pelosi wanting to make a political point, and denying the president something that he would consider to be a win," he said, referring to Speaker Nancy Pelosi (D-Calif.).