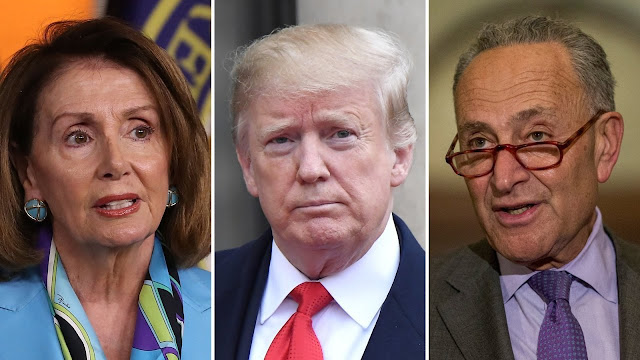 President Trump on Friday sent a letter to lawmakers in both parties demanding a border wall ahead of talks with congressional leaders aimed at resolving the government shutdown.

“Walls work,” Trump wrote. “That’s why rich, powerful, and successful people build them around their homes. All Americans deserve the same protection.”

The letter is being hand-delivered to all congressional offices on Friday, according to the White House.

The president also included a copy of the presentation that congressional leaders were supposed to hear during a Wednesday meeting about what the administration calls an immigration “crisis” at the U.S. southern border.

Schumer, Pelosi and Republican leaders are heading back to the White House on Friday to resume the talks, though the chances of quickly ending the 14-day shutdown appear slim.

White House Press Secretary Sarah Huckabee Sanders issued a warning to GOP senators seeking compromise before Friday's talks began while speaking to reporters: The president is not shying away from the $5 billion price tag he has demanded.

"Look, the president has been willing to negotiate from the beginning but he's not willing to put our national security and the safety of the American people at risk," Sanders said.

"This is what [Border Patrol agents] say they need in order to protect the citizens in this country and protect our borders," she added. "So the president's not backing down from that."

Trump has refused to back away from his demand for $5 billion in border wall funding, while Democrats have said that they don’t plan to provide the president any money for his long-promised wall.

The president’s letter made no mention of a bargain being floated by some senators that would exchange relief for young immigrants living in the U.S. without legal status in exchange for wall funding.

Instead, the presentation calls on Congress to override a legal settlement and revise refugee resettlement laws in order to be able to detain whole families and speed up deportations. Each provision is unpopular with Democrats.

Both sides have engaged in public posturing over the past several days, with Trump taking to the White House briefing room with leaders of the union representing border and immigration agents to make the case for the wall.

Pelosi appeared on NBC News’s “Today” on Thursday morning, where she was asked if she would budge from her position.

“How many more times can we say no? Nothing for the wall,” she responded.