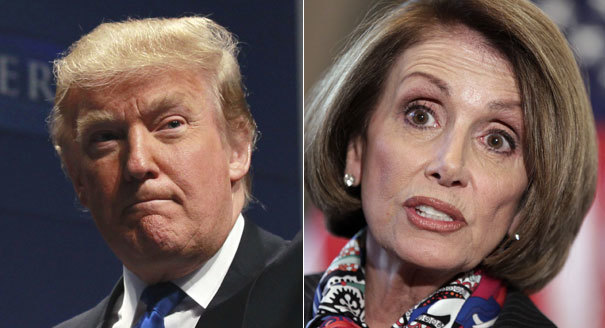 President Trump on Thursday hit back at Speaker Nancy Pelosi (D-Calif.) for warning she may postpone the State of the Union address by scrapping her planned trip overseas.

In a letter to Pelosi, Trump told her that a congressional delegation trip she intended to take to Brussels, Egypt and Afghanistan, which he dismissed as a “public relations event,” is now “postponed.”

“We will reschedule this seven-day excursion when the shutdown is over,” Trump wrote. “I also feel that, during this period, it would be better if you were in Washington negotiating with me and joining the Strong Border Security movement to end the shutdown.”

The announcement appears to mean that Trump will refuse to provide military transportation for lawmakers to make the journey, which would have included a stop in a war zone.

Trump added, however, if Pelosi wanted to go ahead by flying commercial, “that would certainly be your prerogative.”

The letter was Trump’s first response to Pelosi’s proposal to move the State of the Union back from its scheduled date on Jan. 29. Pelosi cited security concerns related to the record-long shutdown.

The White House had remained unusually silent in the 24 hours after the Speaker sent her letter and officials had said they were in no rush to respond.

Trump did not directly address the Speaker’s request to move the date of his speech.

Pelosi's office did not immediately respond to a request for comment. There was speculation on Capitol Hill that Pelosi's trip, which had not been previously announced, may have already been canceled when congressional leaders scrapped next week's recess.

Hoyer said he was aware of the trip, but does not know when Pelosi learned it was canceled.