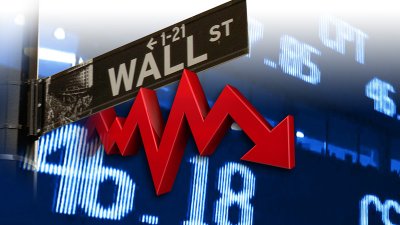 "As I have stated many times, if the Democrats take over the House or Senate, there will be disruption to the Financial Markets. We won the Senate, they won the House. Things will settle down. They only want to impeach me because they know they can’t win in 2020, too much success!" he Tweeted.

When Democrats won the House in November's election the immediate reaction from markets was positive, with the Dow Jones Industrial Average bouncing more than 500 points.

Overall, 2018 marked the worst year for U.S. stock markets in a decade. December was particularly brutal, with the worst December drops since the Great Depression.

Trump's tweet came shortly before a robust jobs report that the economy gained more than 300,000 jobs in December.

On Wednesday, Trump claimed that December was simply “a little glitch,” and predicted that markets would rise.

The market ended a lengthy period of relatively stable increases last January, entering a new phase of volatility that has seen wild swings in the markets. By late summer and early autumn, markets seemed to have recovered, only to come tumbling down again in October.

Before the downturn, Trump frequently took credit for the stock market's performance.

On Thursday, Democrats formally took control of the House, an event that was already priced into the market.

The Dow Jones plunged 660 points on Thursday following an announcement by Apple that it was cutting its revenue projections due to slowing growth in China. Among the factors Apple cited in its report was Trump's ongoing trade war with China.