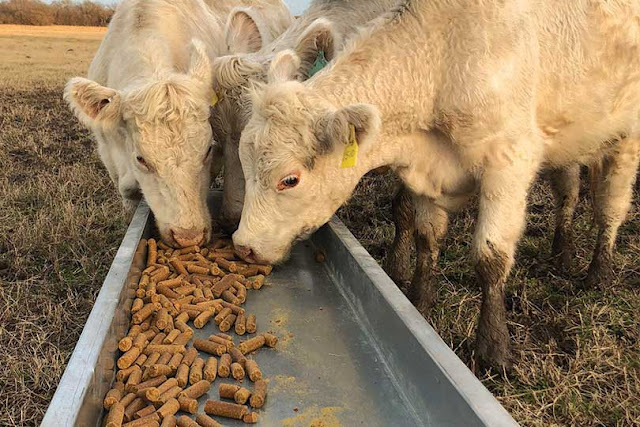 Feeding your cows in the early evening could help with spring calving.

“It is generally accepted that the amount of supervision of the calving process is directly related to calf survival,” Judd said. “If someone is monitoring the cows, more calves will be saved.”

While the exact cause of the decrease in nighttime calving isn’t known, scientists believe it involves a hormonal effect in the cows.

The concept is called the Konefal Calving Method, which is named after Gus Konefal, a Canadian rancher who first reported the phenomena in the 1970s.

Several studies have found positive results using the methods among their herds, Judd said. One such study in Iowa looked at 1,300 cows from 15 different farms fed once a day at dusk. The study resulted in 85 percent of the calves being born between 6 a.m. and 6 p.m.

A Kansas study found similar results over a five-year period. Cows fed sorghum hay between 4 and 6 p.m. resulted in more than 85 percent of the cows calving during daylight hours.

“If you are feeding baled hay, now is the time to start feeding early evening to increase the chance the cows will calve during the day,” Judd said.

Farmers and ranchers feeding round bales should keep the bales in a separate pasture, Judd said. Cows should be allowed access to the round bales at 6 p.m. and can remain there overnight.

“This method is not 100 percent,” Judd said. “If you are calving out heifers, you still need to check them in the middle of the night, but nighttime calving will be much less with this method.”