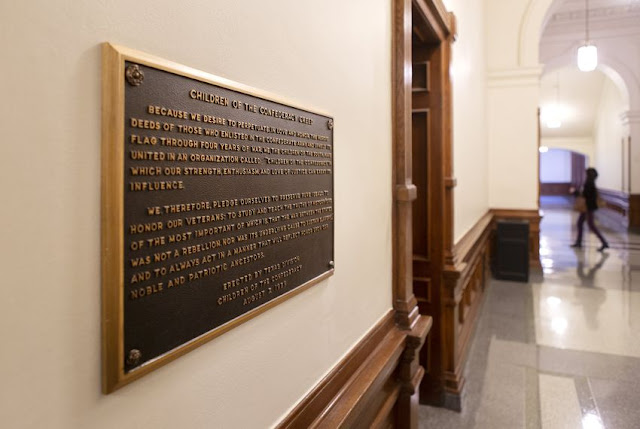 After complaints have persisted for more than a year, a state board that oversees the Texas Capitol grounds will meet next week to consider removing a plaque that declares that the Civil War was “not a rebellion, nor was its underlying cause to sustain slavery.”

The Jan. 11 meeting comes more than a month after Gov. Greg Abbott called for it in a letter, which did not specify an agenda, to Executive Director Rod Welsh. This will be the Abbott-led board’s first meeting since March 2017, and Abbott’s letter came less than two weeks after Attorney General Ken Paxton issued an opinion saying the panel is among those who have the authority to take down the plaque.

The meeting will take place three days after the start of the 86th Legislature. The new Texas House speaker and the lieutenant governor serve with Abbott on the board as co-vice chairs.

Momentum for removing the plaque has picked up steam in the past few weeks. Republican state Rep. Dennis Bonnen, the presumptive next House speaker, has called for its removal, saying the plaque was "historically inaccurate.” And in perhaps the most explicit call from a statewide official yet, Land Commissioner George P. Bush tweeted that "these displays belong in museums, not our state capitol."

The push to remove the plaque began in 2017 after state Rep. Eric Johnson, D-Dallas, wrote a letter to the Preservation Board asking for the removal of Confederate iconography from the state Capitol. He previously said that the Confederacy plaque, which is located outside of his Capitol office, “is not historically accurate in the slightest, to which any legitimate, peer-reviewed Civil War historian will attest.”

Johnson declined to comment on news of the agenda for next week’s meeting.