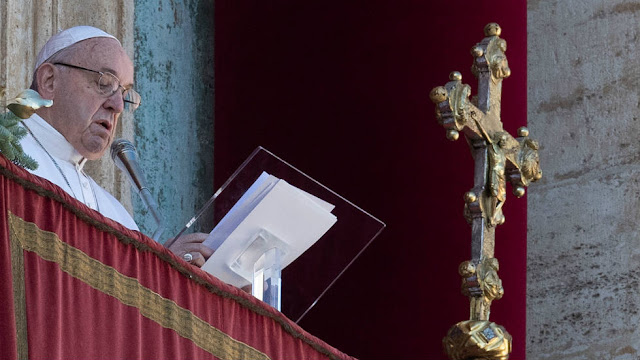 Pope Francis in his traditional Christmas Day message from Vatican City urged the world to embrace differences, calling for “fraternity among people with different ideas.”

Francis in his address to tens of thousands of people gathered at St. Peter’s Square on Tuesday called for “fraternity among people with different ideas, yet capable of respecting and listening to one another,” Reuters reported.

The pope also said God wants “love, acceptance, respect for this poor humanity of ours, which we all share in a great variety of races, languages, and cultures,” the news service added.

“Our differences, then, are not a detriment or a danger; they are a source of richness,” he said.

“This truth is the basis of the Christian vision of humanity,” Francis said, according to The Associated Press’s reporting of his remarks.

“Even our best plans and projects risk being soulless and empty,” without fraternity, he said, the AP added.

The pope also reportedly touched on the conflict between Israelis and Palestinians and strife in Syria, Yemen, Nicaragua, Venezuela and Ukraine and on the Korean peninsula.