Michael Cohen: Nothing was ever done unless it was run through Trump 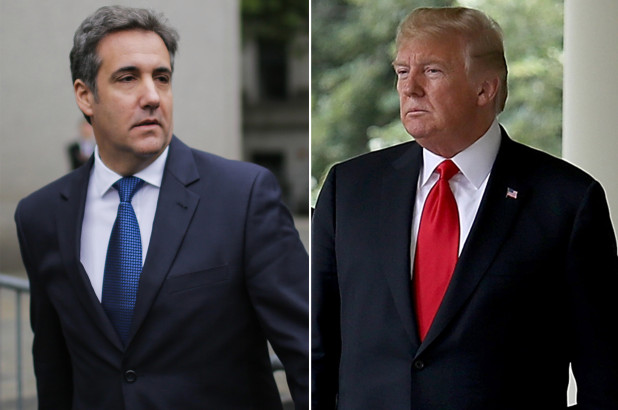 President Trump’s former lawyer Michael Cohen in an interview said that “of course” Trump knew it was wrong for Cohen to arrange hush-money payments to women who claim past affairs with Trump.

Cohen sat down with ABC’s George Stephanopoulos during an interview aired on Friday’s “Good Morning America” — his first time speaking publicly since he was sentenced to three years in prison over the payments — directly contradicting Trump's claims that he did not order Cohen to make hush-money payments.

The president has denied ordering Cohen to break the law during the 2016 campaign by paying off adult-film star Stormy Daniels and former Playboy model Karen McDougal, both of whom claimed to have had affairs with Trump.

The president has denied the affairs.

“First of all, nothing at the Trump organization was ever done unless it was run through Mr. Trump,” Cohen said. “He directed me to make the payments, he directed me to become involved in these matters.”

Cohen told ABC News that he also knew what he was doing was wrong.

“I stood up before the world [Wednesday] and I accepted the responsibility for my actions,” he said of his sentencing.

Cohen was charged in connection with the payments. Federal prosecutors with the U.S. Attorney’s Office in the Southern District of New York argued that the payments, which each exceeded $100,000, amounted to campaign contributions in excess of the federal limit.

He will be allowed to voluntarily surrender to federal authorities on March 6. Cohen has also been ordered to pay $1.4 million in restitution, forfeiture of $500,000 and a fine of $50,000.

Trump has denied that the arrangements were campaign contributions, calling them on Monday a “simple private transaction.”

Cohen said he was “angry at himself” for what he did but said he was driven by “blind loyalty” to Trump, whom he worked for at the Trump Organization for many years.

“I gave loyalty to someone who, truthfully, does not deserve loyalty,” Cohen said in the interview.

Cohen went on to say that the Trump he knew for more than a decade before the 2016 campaign is barely recognizable from the man in the White House.

“He’s a very different individual,” Cohen said. “I think the pressure of the job is much more than what he thought it was going to be. It’s not like the Trump organization where he would bark out orders and people would blindly follow what he wanted done.”

“There’s a system here; he doesn’t understand the system and it’s sad because the country has never been more divisive and one of the hopes that I have out of the punishment that I’ve received as well as the cooperation that I have given I will be remembered in history as helping to bring this country back together.”

“I will not be the villain of his story,” Cohen added.