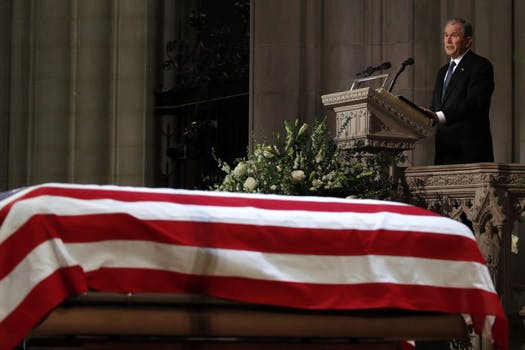 Former President George W. Bush on Wednesday eulogized his father, George H.W. Bush, as a family man and devoted public servant who overcame brushes with death to live a full and accomplished life.

"To us, his was the brightest of a thousand points of light," Bush said, borrowing his father's signature phrase.


Concluding his eulogy, the 43rd president broke down as he remembered the elder Bush as "the best father a son or daughter could have" and said he would be at peace knowing he could join his late wife, Barbara, and the daughter he lost as a 3-year-old.

"In our grief, let us smile knowing that dad is hugging Robin and holding mom's hand again," Bush said.

Bush said he called his father last Friday when he was told he had minutes to live, and said he told him "'Dad, I love you and you've been a wonderful father.'"

"And the last words he would ever say on earth were, 'I love you, too,'" Bush said.

The Bushes shared the unique bond of being the only father-son duo to serve as president in modern times and the younger Bush said his father taught him how to "serve with love" for his fellow Americans.

"To his very last days, dad's life was instructive," Bush said. "As he aged he taught us how to grow with dignity, humor and kindness."

Bush said his father's joie de vivre originated from his harrowing rescue after being shot down during a Naval air mission during World War II and his survival from a staph infection as a teen.

"I think those brushes with death made him cherish the gift of life, and he vowed to live every day to the fullest," Bush said, adding that his father was "always busy, a man in constant motion but never too busy to share his love of life with those around him."

Bush's eulogy was also full of light-hearted moments, including a retelling of how his father's close confidant, James Baker, sneaked steak and vodka into the hospital for him and the time the 41st president jumped out of an airplane on his 90th birthday.

He joked that his father was "perfect but not totally perfect, his short game was lousy," said he "wasn't exactly Fred Astaire on the dance floor" and noted his famous dislike of broccoli.

"The man couldn't stomach vegetables, especially broccoli. And by the way, he passed along these genetic defects to us," Bush said to laughs from the crowd of hundreds of leaders and dignitaries at the Washington National Cathedral.

George H.W. Bush passed away last Friday at the age of 94 in his hometown of Houston after a long battle with a form of Parkinson's Disease.

His funeral brought together five former presidents that put on display their awkward relationship with the current occupant of the Oval Office, President Trump.