George H.W. Bush funeral train will be first this century 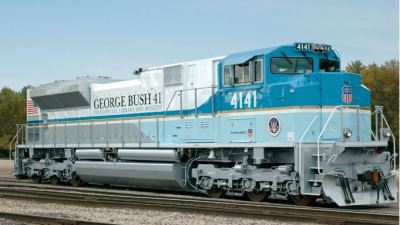 A presidential funeral train will be used on Thursday for the first time in almost 50 years, as George H.W. Bush is transported to his final resting place in Texas, according to The Associated Press.

Bush will be transported via the train from Houston to College Station, where he will ultimately be laid to rest.

It will be the first presidential funeral train since one took former President Dwight Eisenhower from the Washington National Cathedral to Kansas nearly 50 years ago, according to the AP. It will be the eighth time overall that such a train has been used.

Bush, who died last Friday at 94, was honored on Wednesday with a state funeral at the Washington National Cathedral. His remains were then flown to Houston, where he was scheduled to lie in repose at St. Martin’s Episcopal Church until Thursday morning.

Another funeral service will then be held for Bush on Thursday at that church before he is taken via train  to College Station's Texas A&M University.

Once in Houston, a motorcade will take the former president to the George Bush Presidential Library and Museum at the university, where he will be buried alongside his wife, former first lady Barbara Bush, and a daughter who died of leukemia at the age of 3, Robin.