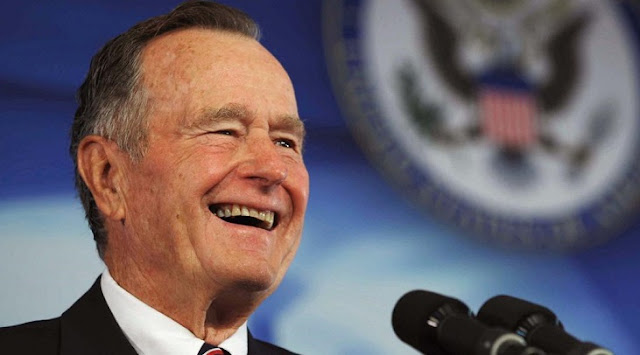 Both the House and Senate had been scheduled to start their work week with votes on Monday evening. Instead, they're expected to hold their first votes of the week on Wednesday in the wake of Bush's death.

The Senate canceled votes for both Monday and Tuesday. According to a notice from the Senate Republican Policy Committee, which is overseen by Sen. John Barrasso (R-Wyo.), votes will now be on Wednesday with the exact timing to be determined.

A spokesman for Majority Leader Mitch McConnell (R-Ky.) confirmed that Monday evening's 5:30 p.m. vote had been postponed. The GOP leader is expected to address the schedule change once the Senate comes into session at 3 p.m.

The House is also delaying votes and will not be in session on Tuesday, according to a scheduling announcement over the weekend from House GOP leadership.

"Per the Speaker's announcement, the House will now meet on Monday, December 3, to consider resolutions pertaining to the lying in state of the 41st President of the United States, George H.W. Bush. No votes are expected in the House," the announcement said.

The Senate generally leaves Washington for the week on Thursday afternoon, while the House is scheduled to be in session on Friday morning.

Bush's death is the latest shuffle to an increasingly chaotic end-of-the-year schedule, where leadership is juggling must-pass bills and competing requests from rank-and-file members.

Former President George W. Bush announced that his father had passed away on Friday night describing him “as a man of the highest character and the best dad a son or daughter could ask for.”

Bush, who was 94, will lie in state in the Capitol Rotunda starting on Monday. A bicameral arrival ceremony is expected to be held at 5 p.m. on Monday evening.

President Trump ordered flags at half-mast for 30 days and, in a proclamation, declared Wednesday as a national day of mourning. A memorial service is expected to be held Wednesday at the National Cathedral in Washington.