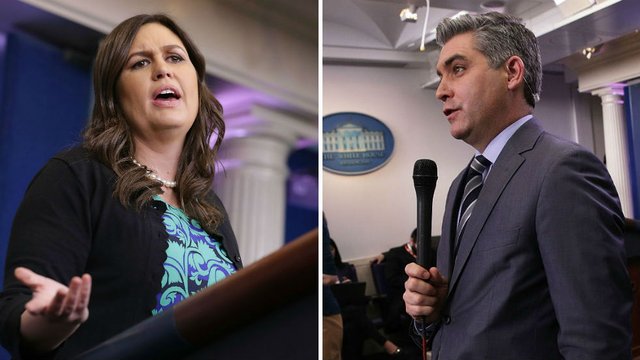 The White House on Tuesday dismissed a lawsuit from CNN after the administration revoked White House Correspondent Jim Acosta’s press pass, saying the network was “grandstanding."

Press secretary Sarah Huckabee Sanders said in a statement that Acosta “is no more or less special than any other media outlet or reporter with respect to the First Amendment."

The White House suspended Acosta’s credentials on Wednesday after he did not allow a White House intern to take the microphone from him after Trump cut him off following several questions about the migrant caravan and the Russia investigation.

“After Mr. Acosta asked the President two questions — each of which the President answered — he physically refused to surrender the White House microphone to an intern, so that other reporters might ask their questions,” Sanders wrote in a statement. “

Sanders, who is also named as a defendant in the the suit, last week accused Acosta of "placing his hands on a young woman."

She later shared a doctored video on her Twitter account that sped up the encounter to make it look more aggressive in an attempt to justify her suspension of Acosta’s pass.

Mention of the alleged physical altercation was noticeably absent from the press secretary’s Tuesday statement.

"The White House cannot run an orderly and fair press conference when a reporter acts this way, which is neither appropriate nor professional," Sanders said. "The First Amendment is not served when a single reporter, of more than 150 present, attempts to monopolize the floor. If there is no check on this type of behavior it impedes the ability of the president, the White House staff, and members of the media to conduct business."

The administration vowed to “vigorously defend against this lawsuit."