Wheat rust showing up in High Plains, but treatment not recommended 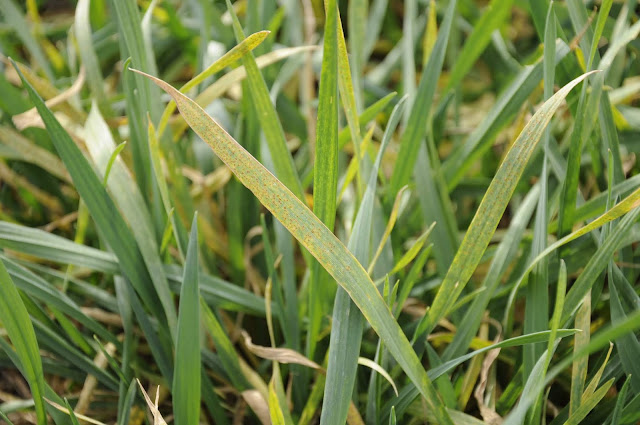 Recent and abundant rains in some areas have producers concerned about leaf rust that is appearing in High Plains wheat fields, but a Texas A&M AgriLife Extension Service specialist said treatment is not recommended at this time.

“The weather conditions this year, particularly the late and significant precipitation we’ve received in different parts of the state, along with the cycles of cold/freezing and warm weather since October, are creating favorable conditions for leaf rust in wheat,” said Dr. Ken Obasa, AgriLife Extension plant pathologist in Amarillo.

Obasa said he has received reports of widespread leaf rust in wheat fields from the northwest and northeast parts of the Panhandle, as well as some parts of the South Plains.

“While the incidence and amount of leaf rust observed in some fields this fall is a little higher than usual, there is no reason to panic,” he said. “Fall infections can be severe. But fungicide applications for control in the fall, especially late fall, are not recommended, as they have not been shown to provide a good return on investment.”

The rust fungus growers are seeing in their fields now likely will be killed by the first killing freeze, but certainly would not survive the winter if the crop is grazed, Obasa said.

Rust infections are optimal at temperatures between 59-77 degrees, and under favorable conditions, infection can be completed within six to 10 hours, he said. The disease establishment following successful infection, and subsequent cycles of secondary infections thereafter takes only seven to 10 days.

Obasa said volunteer wheat plants generally increase the risk of rust infection to grain fields. These volunteer patches should be inspected for rusts, and whenever possible, eliminated, preferably several weeks before the planted crop emerges.

“The rust fungus is easily dispersed by wind and consequently can spread quickly, especially under favorable conditions such as those prevalent now in most parts of the High Plains,” he said.

Producers should be prepared to closely monitor their fields for early rust development in the springtime, once the crop comes out of dormancy, Obasa said. At that time, they will need to make a decision on applying treatments, based on their plans for the wheat and the economics involved.

“In severe outbreaks during the spring, loss due to wheat rust has been reported to reach 50 percent,” Obasa said.

“If you are seeing possible rust-like symptoms in the early spring after temperatures begin to increase, including chlorotic (yellowing) flecks or brownish necrotic spots on your wheat, you should get verification that rust is present and then make a decision about a fungicide application, using a systemic foliar fungicide, depending on the cost-benefit.”

Examples of classes of fungicides that can be considered for preventive treatment are tebuconazole, prothioconazole, propiconazole, solatenol-containing fungicides, or a combination of these classes, he said.

“If you know that rust is already present, and again, after careful consideration of the cost-benefit, options of fungicide classes that can be used for curative applications include, but are not limited to, triazole, tebuconazole, propiconazole and cyproconazole,” Obasa said.

The early symptoms of rust can sometimes be tricky to diagnose, the plant pathologist said. He recommends producers contact their AgriLife Extension county agent or crop consultant if additional help is needed to make a determination.

“Keep in mind that if it’s rust, typical rust pustules should be visible after about a week, allowing a more definitive visual diagnosis,” Obasa said.

He said if producers are unsure, they can bring or send samples for diagnosis to the Texas High Plains Plant Diagnostic Laboratory at the Texas A&M AgriLife Research and Extension Center, 6500 Amarillo Blvd. West, Amarillo.

For further information about identifying leaf and stripe rust, refer to the publication titled “Identifying Rust Diseases of Wheat and Barley” at http://bit.ly/19sm9R4.