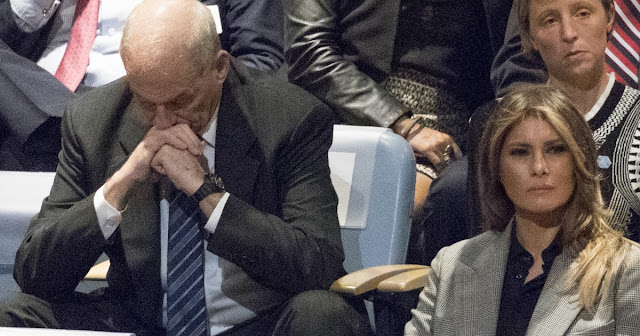 Kelly and Trump have reportedly clashed over the first lady's staffing requests and her travel arrangements.

Those requests remained in limbo for months, with Kelly reportedly insisting that there weren't enough open spots for those aides to have senior titles.

Kelly and Melania Trump have also reportedly feuded over travel arrangements for the first lady's staff, with Kelly often refusing to make space available for her aides aboard Air Force One and on helicopters, according to NBC News.

The first lady's staff members have also often been without hotel reservations while traveling and haven't been listed for motorcade travel, according to NBC News.

Grisham told The Hill in a statement that Trump "has a very positive relationship" with Kelly and that there "have never been any issues" between the two.

Grisham also said that that the East Wing is "very focused on the First Lady's initiatives and works independently."

"However, we do collaborate on a variety of projects and work alongside many departments within the West Wing. We have a very positive working relationship," Grisham added.

The White House did not immediately return a request for comment from The Hill.

Kelly's potential ouster from the White House has long been rumored as a possibility. He was brought in last year to replace Reince Priebus, President Trump's first White House chief of staff.

NBC News noted that Kelly has also clashed with national security adviser John Bolton. The two were reported to have engaged in a profanity-laced verbal disagreement outside the Oval Office last month.

Homeland Security Secretary Kirstjen Nielsen is also reportedly on the way out, according to a report from The Washington Post.

Nielsen was Kelly's chief of staff when Kelly was secretary of Homeland Security and filled the role when he moved to the White House, and Kelly has defended Nielsen from Trump's attacks.

Trump has reportedly been frustrated with Nielsen's efforts on immigration as the administration deals with a wave of new arrests along the border.