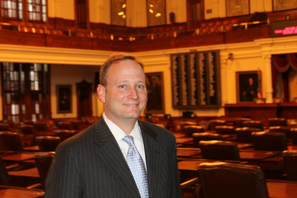 By Alex Samuels and Cassandra Pollock

Two Republicans dropped their bids for speaker of the Texas House Sunday and endorsed state Rep. Dennis Bonnen, R-Angleton, for the job.

On Sunday, state Rep. Four Price of Amarillo announced he was exiting the race, saying he and Bonnen have “had a number of candid and productive conversations about our vision for the future of Texas and how we can work together to make that future as bright as possible.” Hours later, state Rep. Phil King of Weatherford confirmed to The Texas Tribune that he was also ending his candidacy. “I think it’s very important that the Republican caucus be united,” King told the Tribune when reached by phone. “I think Bonnen is our best opportunity to elect a Republican speaker.” King’s decision to end his bid was first reported by Quorum Report.

Price and King are the latest Republicans to drop their respective speaker bids. Last month, state Rep. John Zerwas, R-Richmond, announced he was ending his campaign for the top leadership slot in the lower chamber. Zerwas’ announcement came amid a gathering of roughly 40 Republicans in Austin to discuss urging Bonnen to throw his hat into the ring. Bonnen did so two days later.

All three Republican lawmakers’ exits from the race come just weeks before House Republicans are scheduled to caucus and then rally around the group's preferred pick for speaker. That meeting, which is set for Dec. 1, would aim to solidify the party choice for a speaker candidate ahead of the Texas Legislature session in January.

Meanwhile, Democrats, fresh off a 12-seat pick-up in the general election, are confident they’ll play a bigger role in the speaker selection process. Days after this year’s midterm elections, state Rep. Chris Turner, the chair of the Texas House Democratic Caucus, said that a majority of the soon-to-be 67-member group had already signed an agreement pledging to vote together for a speaker candidate.

To be clear, some of the Republicans still running for speaker have said they don’t think the dynamics of the contest have changed much — despite the fact their party, which will still hold 83 seats come January, lost a considerable number of them in the elections.

Alongside Bonnen, Tan Parker of Flower Mound, Travis Clardy of Nacogdoches and Drew Darby of San Angelo are currently in the running for control of the dais during next year’s legislative session. Democrat Eric Johnson of Dallas also filed to run for House speaker.