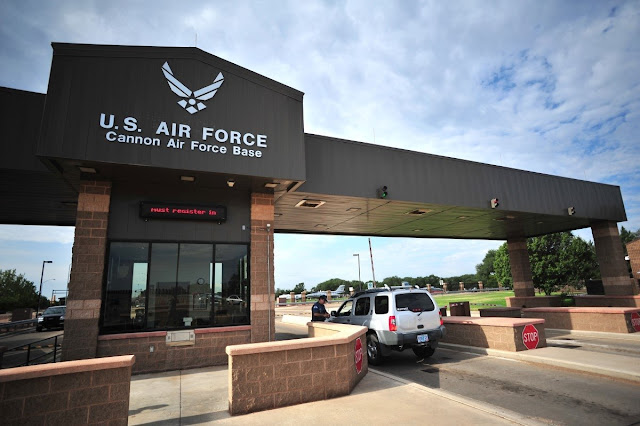 Cannon Air Force Base hosted a Town Hall Public Information Session at the Clovis-Carver Public Library North Annex, with State and Federal agencies to address community concern over PFOS and PFOA contamination stemming from past firefighting activities on base.

In late August, Cannon leadership was informed that several groundwater monitoring sites near the south east corner of the base boundary registered levels of Perfluorooctane Sulfonate (PFOS) and Perfluorooctanoic Acid (PFOA) above the EPA Lifetime Health Advisory for drinking water, of 70 parts per trillion. These compounds, found in Aqueous Film Forming Foam (AFFF) is used by emergency fire response teams at commercial airports, the Air Force and other services to combat petroleum-based fires.

The Air Force Civil Engineer Center (AFCEC), who leads the testing program, determined that per groundwater hydrology analysis, that an Expanded Site Inspection (ESI) was necessary to determine potential impacts to private drinking water wells off base. The sampling and testing is part of the Air Force’s proactive, service-wide investigation to assess potential risk to drinking water from PFOS / PFOA contamination. The ESI commenced in late August and is ongoing.

Through frequent dialogue with the Curry County Commission, Cannon leadership was informed of the concern in the local community. “Cannon’s relationships in this community are invaluable to us,” said Colonel Stewart Hammons, 27th Special Operations Wing, Commander. “Their enduring support enables us to do the extremely important operational mission we have in defending our nation’s freedom and supporting Special Operations
Forces across the globe,” he elaborated. “When we realized we had an issue at Cannon, the first thing we did was reach out to our community partners. Today’s Town Hall was an effort to bring in the right subject-matter experts from State and Federal Agencies, alongside AFCEC, to answer our community’s questions.”

“We stand strong with Cannon,” said District 3 Curry County Commissioner, Chet Spear. “They have made every effort to communicate this issue with us since Day 1. This community needs state and federal agencies to engage in the political dialogue that will enable the Air Force to address this issue appropriately, so our impacted constituents can get the assistance they need, and so Cannon can concentrate on its mission of defending our freedom”.

The Town Hall Meeting, led by the Air Force Civil Engineer Center, included presentations on the PFOS / PFOA testing program by AFCEC, PFAS contamination by NMED and a chance for the audience to engage over twenty subject matter experts from seven different Air Force, State and Federal agencies in public forum and individual conversation during a poster session.