President Trump reaching out to Democrats ahead of 2018 mid-terms 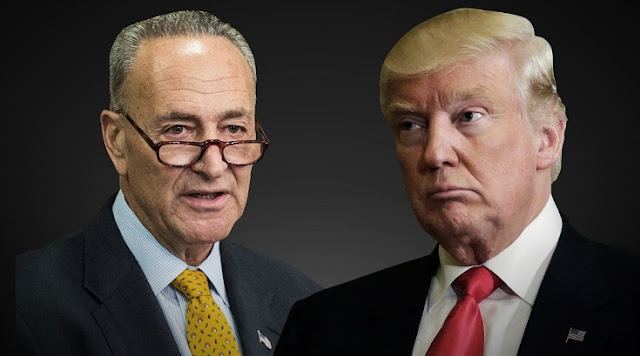 President Trump is making overtures to Democrats about working together next year, a move that would mark a major shift in his approach to dealing with Congress but one that could prove necessary in order to secure big legislative achievements ahead of his reelection campaign in 2020.

If Democrats take control of the House after the November midterm elections, Trump will have no choice but to reach across the aisle if he wants to check off campaign promises such as a massive infrastructure package.

But the partisan animosity in Washington is likely to increase if Democrats win majorities in one or both chambers of Congress, which could make bipartisan deal making all but impossible. Trump could also risk a backlash from his base if they believe he has gone too far in dealing with Democrats.

White House officials say they have begun preliminary talks internally — and with Democratic lawmakers — about areas where they could work together in 2019.

They also say the ball is in the Democrats’ court.

“The president’s always ready to deal. Always,” Shahira Knight, the White House legislative director, said in an interview with The Hill.

Trump has recently indicated he is willing to go down that path again. He said in a "Fox & Friends" interview last Thursday that it would be a “shame” if Democrats won control of Congress, but indicated it could open the door to an elusive deal to rebuild the nation’s roads and bridges.

“There’s a chance that we’ll get along and get along well. We have a lot of things, like infrastructure, that they want and that I want,” the president said.

Trump also crowed about the prospect for bipartisan wins during a signing ceremony for a new law aimed at reducing ocean pollution, the type of televised victory lap he seems to relish. The measure unanimously passed the House and Senate.

“Bipartisan. Did you ever think … you'd hear that? Bipartisan,” he told lawmakers at the White House.

Those remarks came even after Trump denounced Democrats this week as “wacko” and “too dangerous to govern” at campaign rallies designed to fire up his conservative supporters ahead of the midterms.

Some top Democrats already see Trump as a potential ally in an infrastructure push.

Rep. Peter DeFazio (D-Ore.), ranking member of the House Transportation and Infrastructure Committee, said he has a $500 billion proposal “with a revenue source” ready to go.

And Rep. Richard Neal (D-Mass.), who's in line to chair the House Ways and Means Committee, said he sees infrastructure as an area where Democrats can work with the White House.

“Clearly, the administration might be able to move to do some infrastructure work with us,” Neal said.

Both sides are eyeing the other warily.

The White House says it could be difficult to work with Democrats if the party moves ahead with plans to launch wide-ranging investigations into Trump’s presidency and business practices.

“It depends very critically on what their attitude is after the election: if it’s an impeach or obstruct attitude or if it’s a collaborative attitude,” said a senior administration official, who requested anonymity to speak candidly. “And I kind of think there could be a couple of different paths. One is they just want to impeach and investigate and obstruct and just think about 2020 and that’s it, in which case it’s going to be hard to get anything big done.”

But the official added that even if there are investigations, there could still be room to deal on “bipartisan initiatives that don’t rise to the level of front-page news but are still meaningful,” like prescription drug pricing.

Democratic lawmakers could also face overwhelming pressure from liberal activists not to hand Trump a big win before the 2020 presidential election.

Party leaders on Capitol Hill say Trump has signaled he is open to working with Democrats on areas such as infrastructure and health care before, only to back away.

“Democrats believe that there is a bipartisan path forward on those issues, and invite the president to work with us to make real progress for the American people,” said Pelosi spokesperson Ashley Etienne. “The real question is whether the president is willing to work on a bipartisan basis to address these critical issues.”

Another Democratic leadership aide said investigations wouldn't necessarily prevent them from working with the White House on legislation.

“Democrats are not concerned about whether or not the president has ‘soured’ on us because we are pursuing honest oversight of his administration. We are concerned about helping American families succeed. We hope he is, too,” said the aide.

Even in a highly partisan environment, both sides see a chance to work on lower-profile issues such as retirement security, drug pricing and anti-human trafficking legislation.

It is possible that action on prison and sentencing reform, another bipartisan priority for which Trump has voiced support, could slide from the lame-duck session into next year. And Trump will need Democratic votes to ensure Congress approves his renegotiated trade deal with Canada and Mexico.

Democrats, however, have described efforts to work with the White House as proceeding in fits and starts.

In May, the Trump administration angered Democrats by releasing a plan to lower drug costs that excluded the new negotiation powers.

Cummings told The Hill the strategy is a sign Trump “completely abandoned the idea” but said if the president and Republicans are “willing to work together in a bipartisan manner, I stand ready, willing, and able.”

Administration officials say plans on drug pricing are being drawn up but are not yet ready for public release.

Republicans are also conflicted about Trump’s signals to Democrats.

Some want to see Trump secure more wins, regardless of how he gets it done.

Rep. Mark Meadows (R-N.C.), the chairman of the conservative House Freedom Caucus who also sits on the Transportation Committee, called infrastructure a “good bipartisan issue” where Trump could team up with Democrats.

“President Trump has shown a desire to complete his comprehensive transportation initiative from the early days of his administration,” Meadows, who frequently speaks with Trump, told The Hill. “His willingness to work with Democrats and Republicans regardless of who maintains the majority in the House is a pragmatic reality that has to be acknowledged.”

But others are urging Trump not to cut deals with Democrats, especially if they contain elements that anger his conservative base.

“The worst decision Trump could make would be to buddy up with liberal Democrats if Pelosi becomes Speaker,” said one GOP consultant with ties to the Trump administration.

There would be few complaints from conservatives if Trump works with Democrats on issues like retirement savings, or even prison reform, which is popular in some corners on the right, the consultant said. But the president could trigger a backlash if he makes deals on immigration, gun control or even an infrastructure package that spends too much.

“What he should not do under any circumstance is to run to the left on issues that his base hold up as their most important issues,” the consultant said. “That would cause his base to collapse under him. … The last thing he needs right now are the Mark Levins, Rush Limbaughs and Sean Hannitys of the world becoming untethered from him.”

If Democrats win majorities in both chambers, GOP leaders will have very little leverage to stop Trump from cutting deals with Democrats. But if Republicans keep control of the Senate, as expected, Senate Majority Leader Mitch McConnell (R-Ky.) would still have a large say over next year’s agenda.

Further complicating the situation is the fact that Trump has never brokered major legislation across the aisle.

Trump raised hopes for a bipartisan agreement on immigration earlier this year when he summoned Democrats and Republicans to the Roosevelt Room of the White House, telling them he would sign whatever proposal they put on his desk.

But the White House refused to budge on principles authored by hard-line policy adviser Stephen Miller that were unpalatable to Democrats, and prospects for a deal vanished.

Trump next year would likewise find himself in uncharted waters if Democrats are in charge.

The president has formed ties with a handful of Senate Democrats from states he won, such as Joe Manchin of West Virginia. But he has few, if any, close relationships with Democrats on the other side of the Capitol.

Officials say he does not regularly speak to any House Democratic lawmakers.