4 dead after shooting at toddler's birthday party in Taft, Texas 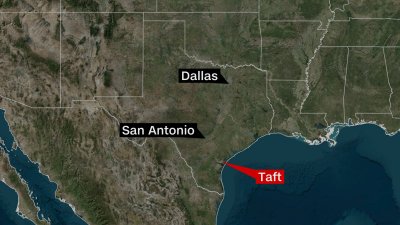 Authorities in Texas have arrested one man and are searching for his father in the fatal shooting of four people -- a 62-year-old man and his three grandsons in their 20s -- at a toddler's birthday party, Sgt. Nathan Brandley of the Texas Department of Public Safety.

Police responded to reports of a shooting at a 1-year-old's birthday party in Taft, north of Corpus Christi, and arrived around 5:15 p.m. Saturday to find four men dead in the back yard of a house, Brandley said.

Witnesses told investigators the shooting began with "an argument over something real small and it escalated real quickly to where guns were involved," Brandley said.

Children attending the party were mostly inside the house, he said. One handgun was involved, he said.

Those killed were identified as Juan Espinoza Sr., 62; and his grandsons Juan Sandoval III, 20; Jeremy Sandoval, 22; and Nicky Sandoval, 25. All were from Taft.

Juan Espinoza Jr., 43, the elder man's son and father to the three younger men, was airlifted to a hospital in Corpus Christi, Brandley said. He is critical condition but is expected to survive, Brandley said.

The younger Rodriguez was arrested at his home in Taft and is now being held in the San Patricio County jail, Brandley said. He said no charges have been filed yet, and he didn't know if Ronnie Rodriguez Jr. had a lawyer.

Belinda Espinoza, the daughter of Juan Espinoza Sr., said her family grew up with the suspects and knew them well. She was not at the house when the shooting occurred.

She said her father was a farmer and a family man.

"He did everything he could for us,"she told CNN. "He was happily married to his first and only love, my mother, Eulalia Sandoval."

She said of her brother, Juan Espinoza Jr., "would give the shirt off his back for others and his children. He always opened his home to anyone."

Her three nephews were all good men, she said, and Jeremy Sandoval leaves behind a young son and wife.