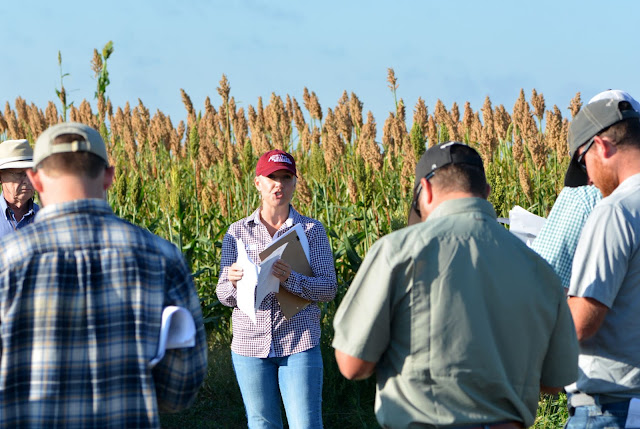 With the expanding dairy industry, the demand for forage is increasing, said Dr. Jourdan Bell, AgriLife Extension agronomist in Amarillo. Bell spoke at a recent field day highlighting varietal performance as well as an update on sugarcane aphids. This is the 19th year for these trials.

These trials are important because the recent increase in demand for forage is occurring at the same time as a decline in water availability from the Ogallala Aquifer, Bell said.

Bell said she conducts her annual field day at harvest time because it allows producers to see how the hybrids are performing side-by-side. Producers have different objectives – some are primarily interested in tonnage, while others are more interested in forage quality.

“There’s a greater interest in forage sorghums because in general they take less water, depending on the maturity class,” Bell said.

She has 60 sorghum entries, including forages, grain sorghums and sorghum sudangrasses, in her 2018 trials. Two corn hybrids are also planted as a check, she said, because producers like to compare sorghum silage with corn silage in both yield and quality.

“It is important to include the corn because it allows us to compare production and yield from the same field environment,” Bell said. “Our data shows there are many cases where forage sorghum does meet or exceed that of corn.”

In high-input situations, she said, corn will outperform forage sorghum. But in the Southern Great Plains, few producers have the irrigation capacity to produce upper-end corn silage yields with limited precipitation.

The trials also include two long-term grain sorghum varieties as checks, she said, but she is also looking at the grain sorghums for their potential in silage.

“In recent years, we’ve started to see some interest in grain sorghum for silage because the shorter plants allow producers to use a ground spray rig, which permits greater application volume and more uniform coverage for control of sugarcane aphids,” Bell said.

The discussion of sugarcane aphid control was continued at the field day by Dr. Ed Bynum, AgriLife Extension entomologist in Amarillo.

Bynum said few forage sorghums have tolerance to sugarcane aphids, so typically that is where the heaviest infestations occur. Initial management should include regularly scouting fields to see when the infestation starts.

“I think farmers should not wait to initiate controls,” Bynum said. “Sometimes they wait until the infestation gets too heavy. If you initiate the control at our threshold recommendations, it is early in the infestation and control is better.”

AgriLife Extension entomologists have advised the threshold for treatment of the sugarcane aphid in the High Plains is when:

– 20 percent of plants are infested with 50 or more aphids in both the pre-boot and boot stages.

– 30 percent infestation of plants in the flowering to milk stages with 50 or more aphids.

– 30 percent infestation with localized areas of heavy honeydew and established aphid colonies when plants are in soft dough and dough stages.

– During black layer, when heavy honeydew and established aphid colonies are present, treat only for preventing harvest problems.

For next year, Bynum said, he is advising producers, if it fits into their operation, to plant forage sorghum earlier. This will allow it to reach a later growth stage before the sugarcane aphid infestations begin, minimizing the damage by the pest.

Bynum said several other trials are being conducted by various AgriLife Extension specialists to aid in the battle against sugarcane aphids.

For two years they’ve evaluated in-furrow insecticide applications of Silvanto at planting. They saw from 80 to 100 days of protection after planting. The chemical is not labeled for that use at this time, but Bynum said their results indicate it could be an option.

Also, while studies show chemigation with Silvanto provides good control of sugarcane aphids on grain sorghum, he said no trials have been conducted on forage sorghum.

“We believe it could be an alternative method of control, but we need to study it more,” Bynum said. “Producers tell us they’ve used chemigation in forage with mixed results on effectiveness. Some say they have had excellent control while others saw poor results. We are trying to determine what factors would have made a difference in the level of control.”