U.S. Rep. Jeb Hensarling, a powerful Dallas Republican who has served in Congress since 2003, announced Tuesday he won't seek re-election to a ninth term. 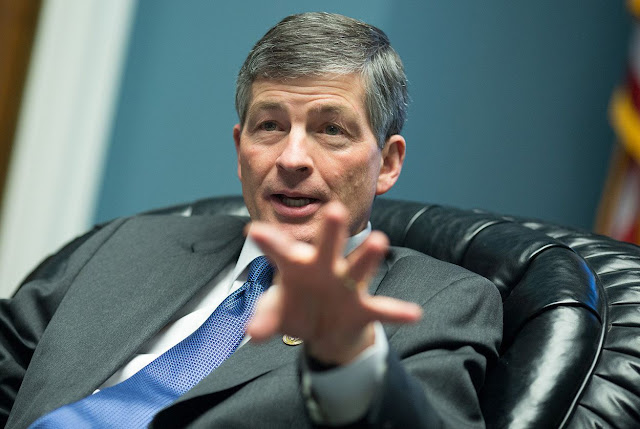 The powerful chairman of the House Financial Services Committee, U.S. Rep. Jeb Hensarling, a Dallas Republican, announced his retirement from Congress on Tuesday afternoon. He is currently serving his eighth term in the House.

"Today I am announcing that I will not seek reelection to the US Congress in 2018," Hensarling wrote in an email to supporters. "Although service in Congress remains the greatest privilege of my life, I never intended to make it a lifetime commitment, and I have already stayed far longer than I had originally planned."

While in a powerful perch with full GOP control of the legislative and executive branches, Hensarling faces a term limit preventing him from continuing his chairmanship at the end of his current term. Hensarling cited that as a reason for retiring, along with spending more time with is family.

Many in Texas saw the retirement coming, thanks to the term-limit issue. In September, Hensarling telegraphed to the Tribune that stepping down could be a possibility.

Hensarling's political awakening took place as a student at Texas A&M; University as a student of then-professor Phil Gramm, a future U.S. Senator. Hensarling would go on to work for the senator and then ran for and won his own U.S. House seat in 2002. In those 15 years, he proved to be one of the truest believers in free-market ideology. While some viewed him as rigid in policy, others saw a congressman who was consistent in his principles.

Hensarling spent the last year at the peak of his power – and not just because of his lofty position as a committee chairman.

As a young congressman, Hensarling befriended two other junior congressmen who would go on to the heights of federal power: Vice President Mike Pence and House Speaker Paul Ryan.

"He is a true constitutional conservative who understands that free enterprise is critical to a thriving America," Ryan said of Hensarling in a statement Tuesday. "I am going to miss him and this institution will miss him, but knowing Jeb, I’m positive he has a great chapter ahead.”

The seat to replace Hensarling will likely be fought in the GOP primary. It is a heavily Republican district that stretches from Dallas deep into the Piney Woods of East Texas.

In the speculation leading up to Hensarling's retirement, a prominent name floated up as a potential successor: former U.S. Rep. Allen West, a Florida Republican who relocated to Texas after leaving Congress. Lt. Gov. Dan Patrick appointed West to the Texas Sunset Commission in 2015.

When reached by telephone by the Tribune, the news caught West by surprise.

On whether he might run for the seat, West said he would read more up on the news but downplayed the idea as a pressing ambition.

"I didn't move here to run for political office, but that's some interesting news you just told me."

Hensarling is the third Texan to retire from Congress this year. U.S. Rep. Sam Johnson, R-Richardson, retired early this year and U.S. Rep. Beto O'Rourke, D-El Paso, is vacating his seat to run for the U.S. Senate.