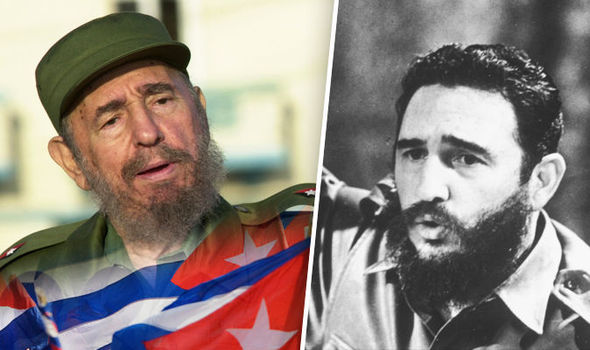 According to the White House, President Obama did not mention Cuban dictator Fidel Castro's violent past because he "wants to move past the painful history." 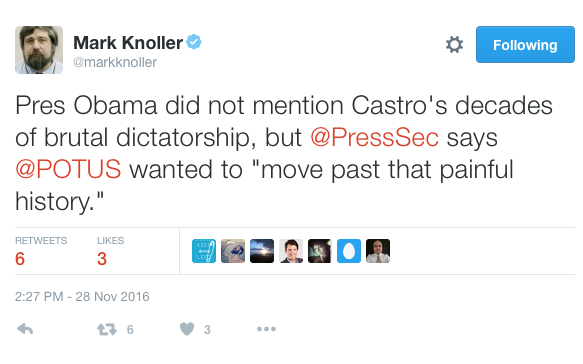 The story of the Cuban Revolution is as remarkable as it is improbable. Castro launched an "invasion" from his exile in Mexico with a single, leaky 60 foot wooden yacht, overloaded with his revolutionaries.

In the Museum of the Revolution in Havana, the two most potent weapons from the revolution are on display: a knife and a typewriter. Behind the museum, the old leaky yacht stands as a symbol of how one man with determination attracted many followers and changed history.

Castro started out has a conscientious reformer. He espoused Communism as the system to use in reforms.

Castro was always violent in his approach with Che Guevara at his side in the beginning. Che was in many ways the real impetus behind the Cuban revolution. Castro managed to get rid of him as well.

Then based on his relative political success, Castro became drunk with power, unrealistic in his expectations, egotistical beyond even the extraordinary we are used to in our celebrities here in the United States.

Castro ignored all proprieties, all necessary restrictions, became abusive, lacking any sympathy to anyone who even mildly criticized him. Fidel Castro became what he was once fighting against: the arrogant, extremely dangerous, coddled, despot who can take whatever he wants, whenever he wants and use it to his satisfaction.

It’s been estimated that as many as 77,000 were killed by the Castro regime merely while trying to flee Cuba. In a country of 11 million, that is astonishing. The regime is known to have killed thousands more by summary extrajudicial execution,, imprisoned thousands more, and denied them medical attention over long periods of incarceration.

Close to one million refugees fled Cuba to the U.S. alone. Cuba under Castro exported revolution throughout Latin America and the world, which took countless additional lives.

Castro played a major role in bringing the world to the very edge of nuclear devastation, thereby risking hundreds of millions. His narrative, including the one supported by many here and elsewhere, rarely mentions those killed and so many lives put at risk.

On the evening of October 22, 1962, President John Kennedy explained the discovery of missiles and the intent of his administration to thwart the Soviet threat, it immediately sank in that this was very serious business. Over the next couple days, Americans heard more about the Monroe Doctrine, which had been discussed just 18 months earlier after the Bay of Pigs fiasco.

Less than a week after Kennedy’s speech, the crisis ended when Premier Nikita Khrushchev backed down after getting a face-saving concession about missile deployment in Turkey.

Eleven months later President Kennedy would be dead, and Khrushchev died less than nine years after the crisis.

When the Cuban Missile Crisis ended, some Americans thought Castro’s days were numbered. But, when the Soviet Union ended in 1991, Castro was still around and kept going in spite of losing his chief protector.

No one expected that Fidel Castro’s regime would still be around near the end of 2016, and that Castro would die in retirement.

The Cuban people deserve real freedom after sixty years and more chasing a mockery of it. But Mr. Obama committed an injustice to all those dead, and the far greater number whose patrimony was taken from them, when he made peace while the Castro brothers still lived.

I can’t wish that Fidel Castro rest in peace. If death contains any justice whatsoever, Castro now inhabits Dante’s Eighth Circle (Subcircles 7-10) of Hell, wherein are condemned the Evil Counselors, people who used their power and their intellect for evil. He is there with Hitler, Stalin, Mao Zedong, Saddam Hussein and so many other mass murders, each consumed by a flickering flame for all eternity.

News of Fidel Castro's death was quick to reach Miami the center of the Cuban exile community, where an outpouring of emotion brought jubilant crowds onto the streets of Little Havana.

At this time of Fidel Castro’s passing, we extend a hand of friendship to the Cuban people. We know that this moment fills Cubans - in Cuba and in the United States - with powerful emotions, recalling the countless ways in which Fidel Castro altered the course of individual lives, families, and of the Cuban nation. History will record and judge the enormous impact of this singular figure on the people and world around him.

For nearly six decades, the relationship between the United States and Cuba was marked by discord and profound political disagreements. During my presidency, we have worked hard to put the past behind us, pursuing a future in which the relationship between our two countries is defined not by our differences but by the many things that we share as neighbors and friends - bonds of family, culture, commerce, and common humanity. This engagement includes the contributions of Cuban Americans, who have done so much for our country and who care deeply about their loved ones in Cuba.

Today, we offer condolences to Fidel Castro's family, and our thoughts and prayers are with the Cuban people. In the days ahead, they will recall the past and also look to the future. As they do, the Cuban people must know that they have a friend and partner in the United States of America.

"Today, the world marks the passing of a brutal dictator who oppressed his own people for nearly six decades.

"Fidel Castro's legacy is one of firing squads, theft, unimaginable suffering, poverty and the denial of fundamental human rights. While Cuba remains a totalitarian island, it is my hope that today marks a move away from the horrors endured for too long, and toward a future in which the wonderful Cuban people finally live in the freedom they so richly deserve.

"Though the tragedies, deaths and pain caused by Fidel Castro cannot be erased, our administration will do all it can to ensure the Cuban people can finally begin their journey toward prosperity and liberty. I join the many Cuban-Americans who supported me so greatly in the presidential campaign, including the Brigade 2506 Veterans Association that endorsed me, with the hope of one day soon seeing a free Cuba," Trump said.
News / Opinion