Is Ciudad Juárez on the brink of a new gang war? 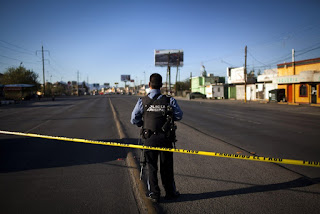 The more than 100 people murdered just south of the Rio Grande last month are a tiny fraction of the killings the city witnessed from 2008 to 2011, when a years-long war between law enforcement and rival drug cartels claimed more than 10,000 lives.

But the October death toll, which includes 96 homicides in the city and seven more on its outskirts, marks the most violent month for Juarez in three years, according to government and media reports. As of August, the number of murders in 2016 had already exceeded 2015's total.

This year's violence — up to 455 murders as of last month — has some in this sprawling, industrial city on edge yet again.

Theories on the uptick in violence aren’t hard to come by.

The local police and the state attorney general blame small-ball heroin and meth peddlers looking to rid themselves of their competition.

“We don’t think we are, by any means, at risk of returning to the way Juarez was before,” said Adrian Sanchez Contreras, the spokesman for the municipal police. “... There have been [more] homicides this month, but it's because of these [retail drug markets] and the disputes between these groups and distribution of these drugs.”

Others attribute it to a shift in political power: In June, the Institutional Revolutionary Party, or PRI, lost the Juarez mayor’s office to Hector Cabada, a former television personality who ran as an independent. In the state capital of Chihuahua, the rival National Action Party won the governorship that same month; the PRI had held power since 1998.

“Obviously now that the [homicides] have increased again, we’re very worried about the situation”— Jose Ubaldo Solis, member of the Ciudad Juárez city council
“The government-criminal relationships that have been in existence over the past six years — whether illicit collusion between the two sides or more benign patterns of interaction and mutual understanding — have been upset,” Patrick Corcoran, an analyst for InSight Crime, a think tank that analyzes crime and policy in Latin America, wrote last week. “... The recent spasms of violence are evidence of different groups jockeying for position under a new political order.”

Solis, the council member who ran as an independent and was sworn in Oct. 10, said the city’s new leaders are working to “correct” the previous administration’s errors, though he didn’t offer specifics on what those were. He also said the mayor and the new police chief are developing a security plan to ensure homicide levels don’t approach what the city has witnessed in the past. As of late last month, those details hadn’t been made public.

But Solis downplayed the idea that a change in power had played a significant role in the recent bloodshed.

“It’s possible, but I doubt it,” he said. “When we took office ... the homicides had already increased,” he said.

Yet another theory is that the violence is linked to a new resident in the city's federal prison: Joaquin “El Chapo” Guzman, the leader of the Sinaloa cartel. Guzman was at the helm of that crime group when it fought the hometown Juárez cartel several years ago for control of the lucrative drug routes that extend from the city's borders. After a brazen 2014 escape from a Mexico City prison, Guzman was recaptured in January and transferred to the Juarez federal prison. The United States hopes he will be extradited.

“The famous capo's arrest and expectations of his extradition has created a vacuum his rivals and heirs are eager to fill,” Corcoran wrote. But the analyst also noted that sustained battles between cartels are rare and that the violence isn’t likely to reach previous levels.

If Guzman’s incarceration is a factor in the recent violence, it would be a new development; it didn't play a significant role in Ciudad Juarez after the kingpin was captured in 2014, though the Valley of Juarez, a remote stretch of small towns and farmland about 30 miles east of the city limits, remained extremely dangerous.


A January report by the U.S. Congressional Research Service estimated that Guzman still controlled about half of Mexico’s drug trade. Some crime experts have suggested that if Guzman’s capture was going to shake up the Mexican crime landscape, it would have happened twice already — once following his 2014 arrest and again with his recapture in January.

Whatever the reason for the latest violence, people who live and work in the city say they know how to stay safe. Juan Mejia, who lives in Ciudad Juárez but travels to Texas to care for his mother in El Paso, said it's as easy as staying out of trouble.

“People just need to be calm. Things are getting ugly, but just stay away from using or selling drugs,” he said. “You get hooked or can’t pay — that’s when they get you.”